Life with Rabbits by Craig Derry

“Rabbits found my heart a little over 10 years ago. A stray rabbit was wondering round our street. I was lucky enough to coax it into my arms one autumn morning before work. Scared, lonely and desperate for safety, we gave this little rabbit sanctuary. And in return, he gave us his love. Max was our first rabbit on a journey that is still continuing.

Rabbits are soulful little beings – full of charm, character and personality. And whilst they might sit behind dogs and cats in the league table of most popular pets, they are often overlooked and very much misunderstood by people. Seen as the epitome of our Easter, many rabbits become ‘temporary’ pets at this time of year. Small, cute, fluffy, they paint an image that sadly is also as much to do with their downfall as it is their popularity. Because not long after easter, many rabbits find themselves innocent victims of the bored factor. The children for which they were bought find they don’t have the time to look after their new companion. Ultimately the rabbits will end up in the numerous rescue centres round the UK.

These rabbits arrive confused, and uncertain of what their lives will become. And yet all the rabbits need is our love and support, warmth, security. And most importantly of all, a companion to share their lives with. Volunteers and staff at these rescue centres work tirelessly and selflessly to provide these beautiful little creatures all of that. But ultimately it is us who can mend rabbits broken hearts. And rabbits hearts do get broken.

I have adopted several rabbits since Max found me, and I am proud to have done so. We have always used and supported rescue centres because this is where those rabbits who deserve a second chance at life can be found. I recall vividly the day I adopted a beautiful harlequin male rabbit. He was sitting, alone, abandoned at a rescue centre in a large cage, and no one else wanted him. But I looked into his eyes and saw a deep love in there. A rabbit just wanting to be with a family and be loved. And Ben, as we named him, got all of that and more. Ben had the biggest heart and was the most gentle of rabbits. Ignored by many and left at a rescue centre, he got his second life with us.

We already had a female rabbit called Georgina, and Ben and Georgina fell in love immediately. They had the best of both worlds – an outside hutch, a lovely safe garden and access to our home when they chose to come into our world. They were inseparable and shared a deep silent love based on body language and understanding. 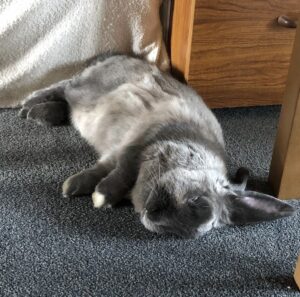 Our next addition came to us in October. Alfred is a gentle bunny, who has an enthusiasm to explore. He loves to climb and is fearless. His journey to us was far from ideal as he was part of a large group of rabbits rescued from an overcrowded hutch. Cramped and confined, Alfred had never even seen a garden or grass before he came to us. Now, Alfred has a large garden to run about in. There are large bushes to hide in and areas to sunbathe in. Alfred loves to be outside, just being free and enjoying the freedom he so desires.

Alfreds wife-bun is Flo. We took in Flo a year ago. She had an extremely traumatic start to life before she found us which left Flo with deep emotional trauma.

Flo had lost her two companions before being abandoned by her family and put up for adoption. She had an emptiness in her eyes and she was quite resistant to a new environment.

The day after we adopted her, we saw the beginning of a weeks worth of snow. Flo was very keen to explore the white blanket that enveloped the garden. This gave way to Flo earning the nickname ‘Sno-Flo’. But Flo was very wary of her new family and she pushed back very strongly by boxing with us. She was not aggressive, but in her own way, she was just reacting to a confusing situation. And I couldn’t explain to Flo that she was safe and free from harm. All I could do was to be patient with Flo and spend time with her so that she could get used to me and her new home. And slowly, over time, Flo did get used to the house. Flo became a house rabbit, taking over the kitchen/dining area.

But as a female, Flo was also extremely territorial and this hampered our efforts to bond her with a new companion. Female rabbits are extremely territorial and as we were unable to locate a neutral part of our house to facilitate a bond with another rabbit, we found ourselves in quite a predicament. But our friends at the Blue Cross approached us and they offered to assist with bonding Flo to their new resident – Alfred. And as the Blue Cross centre was neutral territory, then Flo would not display the aggression that she displayed in our home. We were very sad to hand Flo back to the Blue Cross. But we knew that it was for the better long term, as we would then get Flo back, along with her new companion. 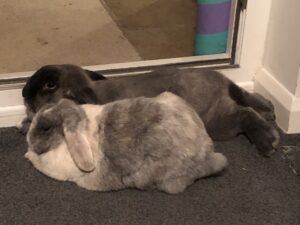 Three weeks later, we re-adopted Flo and her hus-bun, Alfred.

Are you ready to own a rabbit?

When you open up your home to rescue rabbits, you also open up your heart. But you are also healing the heart of those you adopt. It is an acceptance of trust – a trust that the rabbit places in you to be their guardian, because rabbits are a complex species to understand.

Unlike dogs and cats, rabbits cannot vocalise their emotions and feelings. And as prey animals, rabbits have instinctive DNA that means they hide any illness or injury. This makes caring for rabbits extremely challenging because one has to quickly identify any problems or illnesses. Any delay in this process will expose the rabbit to potential suffering or worse. And so, as rabbit ‘parents’, it is vital to understand and become in tune with your rabbit companions. Learning your rabbits routine is extremely important to not only helping to identify any early signs of problems, but to also bond better with your bunny companion.

Being a bunny parent has absolutely given me a greater perspective and awareness of life and also a greater daily focus in my own life. My bunny companions have been there to help me, as I have been there to help them. And they share their love without condition. Despite an obvious sadness that they must have felt as they transitioned through being put up for adoption and then spending time in an adoption facility and without knowing what lay ahead, with patience and care and a lot of love, our rabbits have become a close part of our own family.

We are extremely proud to have given rabbits the life that they deserved and should always have. They have not only taken over our home, but have also become part of our lives. And our lives would be whole lot emptier without the companionship of one of natures most absorbing and understated animals – the beautiful and charismatic rabbit”.

Thinking of getting a Rabbit and need supplies, or finding a new feed supplier?

Send us a message